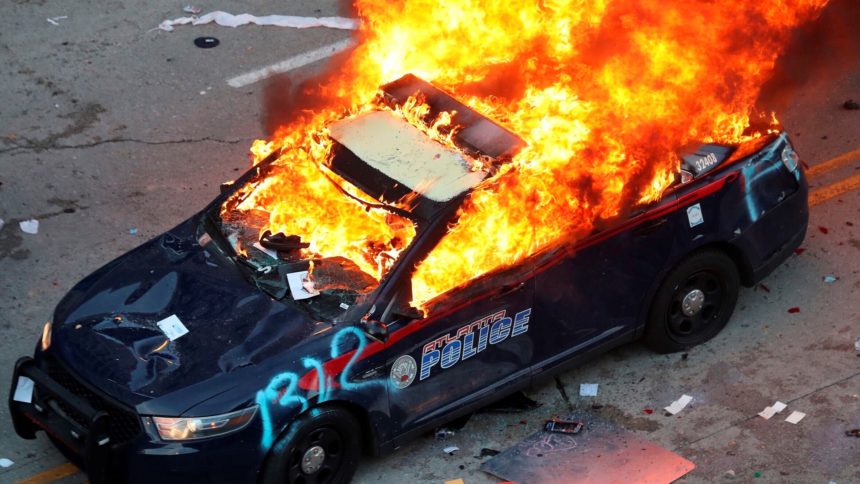 Things began with large crowds of rioters taking to the streets of Atlanta. They burned police cars and broke into the CNN headquarters located downtown, spraying it with graffiti and reportedly attempting to start fires.

Downtown Dallas businesses were smashed and looted, with many squad cars destroyed. Richmond busses were set on fire by rioters.

In D.C., the Treasury Department building was breached and spray painted, while agitators pushed the barriers of the White House.

Portland rioters smashed the Justice Center (which houses the police station) and looted and destroyed the building – while downtown, rioting youths broke into a mall and looted Louis Vuitton bags, among other things.

The epicenter of the chaos continued in Minneapolis. The National Guard was called in by the governor in the afternoon, but was observed pulling back when the rioters advanced. Minnesota’s 5th precinct reportedly had Molotov cocktails, incendiary devices and gas thrown at the police station with multiple officers injured. 350+ Minnesota State Troopers were brought into the 5th precinct around 12am.

The mayor of St. Paul, Melvin Carter, said “every single person we arrested last night, I’m told, was from out of state”. Minnesota Attorney General took to Twitter to blame the riots on “white supremacists”. The Governor of Minnesota fully mobilized the National Guard for the first time in the states history on Saturday morning. In a rare move, the Pentagon announced active-duty troops will be readied to be deployed in Minneapolis – set to deploy within 4 hours if called in.