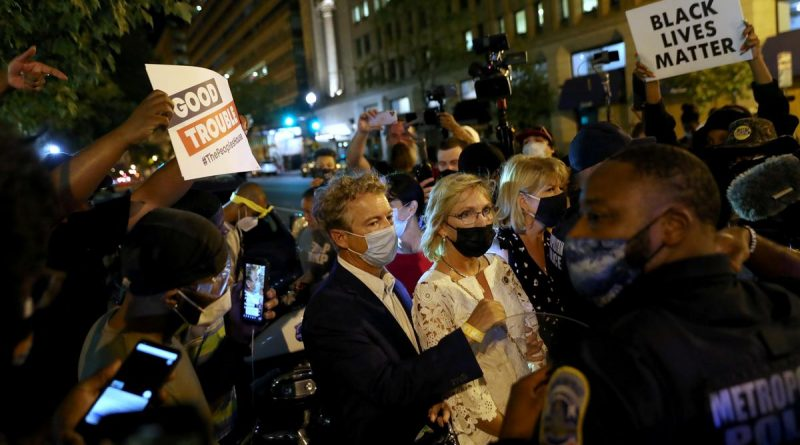 The fourth and final night of the Republican National Convention (RNC) was hosted at the White House in D.C. where President Trump accepted the nomination. Protests were organized in the streets to disrupt the event, also in preparation for the March on Washington set to take place the next day. As RNC attendees left the event, mobs of Black Lives Matter activists met them in the streets. Senator Rand Paul was with his wife when a mob surrounded them, screaming in their faces. D.C. police attempted to escort them out, being vastly outnumbered. Senator Paul had to assist a police officer after he was pushed by a BLM agitator.

An older Trump supporter was punched in the head following the event, and surrounded by an angry mob. One BLM supporter told him “if you touch the black woman’s bullhorn, it will be the last thing [you ever do]”. They continued to follow him down the street while mocking and berating him. A middle aged couple was harassed by another mob of BLM supporters as they attempted to get into their hotel. One woman screamed in the couples faces “I’ll f*ck you up”. Black Lives matter activists spit on another couple entering a hotel after the RNC event, while screaming “f*ck you racist motherf*ckers”, “shut up b*tch” and “f*ck Trump”.

Black Lives Matter also attacked a group of police officers after the event, causing a large scuffle with shouting. A group of protesters during Trump’s speech set up an effigy of Trump under a guillotine, pretending to execute the president. Protesters also flipped off fireworks launched by the RNC.