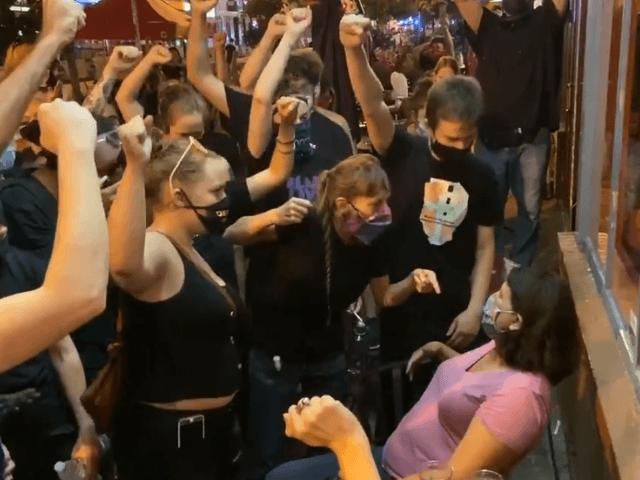 Black Lives Matter activists roamed the streets of Washington D.C. harassing diners at restaurants and bystanders, demanding they raise a fist for ‘black power’. The crowd chanted slogans from “white silence is violence” to “no justice, no peace”. One woman was surrounded by a massive crowd as they screamed in her face, demanding she raise her fist in solidarity. A woman from the crowd shouted accusingly “are you a Christian?”, trying to explain why the woman was not raising a fist toward the sky. Chuck Modiano, a journalist for Deadspin, was also in the crowd taking part in the harassment and sarcastically told the woman “Good for you – you stood your ground”.  The woman who was harassed later told the Washington Post, “I felt I was under attack.” The video received 8.8 million views on Twitter.

Earlier in the day, the BLM mob harassed a young couple while they were eating at a restaurant.  The couple refused to raise their fists (with all other patrons in the area submitting to the will of BLM), with BLM shouting in their faces and giving the middle finger.

While these scenes may seem strange to us in 2020, they were extremely common during the Mao’s Cultural Revolution in 1968 China. The youth “Red Guard” would use similar tactics to develop a zombie-like support for the revolution. They would pull people off trains and demand they recite passages from the ‘little red book’, which was filled with propaganda for the revolution. If they did not recite the passage, they were humiliated and usually beaten. Others would be forced to wear large hats with their ‘sins’ against the revolution inscribed on the surface. This was called a ‘struggle session’ and was designed to crush any dissenting opinions toward the revolution.

Would you raise a fist in worship and solidarity of BLM if demanded by an irate crowd?