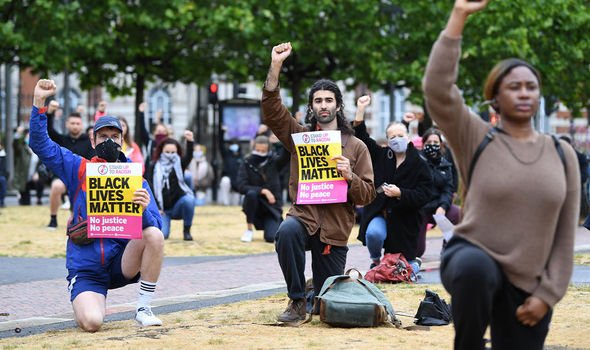 BLM is the Most Powerful Political Organization in America

Black Lives Matter (BLM) is the strongest and most influential political organization in America.

Here a summary of the following article:

Gained a Majority of Support in 4 Years

Black Lives Matter (BLM) is an organization founded in 2013 after Trayvon Martin (who was black) was shot by a Hispanic neighborhood watch coordinator, George Zimmerman. This was perceived as a racially motivated incident, with the media reporting it as a white-on-black crime. A court acquitted Zimmerman of the murder charge, citing self-defense. The acquittal inspired a Facebook post including the phrase “black lives matter,” which later became the Black LIves Matter movement.

Seven years later, BLM has 62% popularity among Americans. When polled four years ago, BLM only had 37% favorability from Americans (both numbers from right-leaning Rasmussen polling). In contrast, President Trump’s approval rating is 43% and Joe Biden’s approval is at 44.5%. Gallup confidence rating measuring either a “great deal” or “quite a lot” of confidence puts “churches or organized religion” in church and organized religion at 36%, with Congress receiving 11% (as Tucker Carlson pointed out on his show). BLM is growing in popularity.

BLM is Well-Funded by Grassroots Activists and Corporate Donors

BLM and ideologically-related organizations are well-funded at the corporate and grass-roots level. The Minnesota Freedom Fund, which pays cash bail for rioters, looters and protestors received $20 million within days from celebrities and grassroots donors. ActBlue, which distributes money to Democratic candidates, bail funds and BLM related causes, raised over $60 million according to reports. Corporations are donating in large numbers too, with EA gaming donating over $250,000 in employee matched donations directly to BLM and Ubisoft with $100,000 in donations. Facebook pledged $10 million to organizations related to “racial justice.” Beauty company Glossier has committed $500,000 to BLM.

Major American institutions are coming out in support for BLM and related causes. American mega-churches all over the country have had panels on “white privilege.” Hillsong Church senior pastor and founder Brian Houston supported BLM in a statement saying, “Hillsong Church is opposed to racism and we believe black lives matter.” Life Center Church in Milwaukee also signaled support, with pastor Micaiah Young preaching on the topic. Thousands of pastors have made statements tacitly calling police in the United States racist and calling for an end to “systemic racism.”

Almost every corporation has used their social media to promote the BLM movement in some form. Target, Spotify, Hulu, Netflix, Sony, McDonalds and hundreds of other companies posted statements on “racial injustice.” LEGO pulled ads and marketing for police-related and White House related products.

BLM has very good communications and PR strategy, complete with glowing media coverage. CNN, MSNBC, ABC, New York Times, Washington Post and local affiliates have highlighted the peaceful side of protests, showing people demonstrating in the streets. The demands of Black Lives Matter (defund the police, destroy the Western nuclear family, etc.) have been cleverly pitched to average citizens. The media has attempted to make demands more palatable, depending on the audience. For example, dozens of news organizations tried to explain “defund the police” didn’t actually mean defund the police. Rioting, looting, smashing, tearing down statues, killing police officers (yes this actually happened) have been ignored or diminished by the media. The strategy of silence was initially used, until it became obvious Americans could see the riots on social media. They shifted to a strategy of shaming the public, virtually saying, “if you look at an AutoZone or Target burning, don’t think of property destruction, think of it as them expressing their pain.”

What goals has BLM accomplished?

Black Lives Matter is the most persuasive and powerful political movement of my lifetime. Raising millions in cash, running a genius communication strategy and launching an unapologetic, aggressive campaign to garner public support. The public admires unwavering resolve, even if this involves violence, destruction or lies about reality.