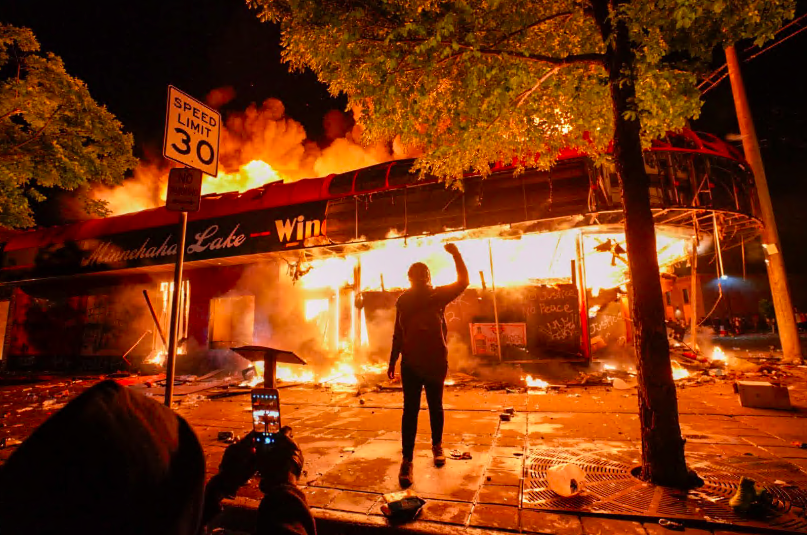 Minneapolis or Mogadishu? Night of Fires, Looting, and Rumored Kidnappings in MN

As a day of looting Verizon and Target stores came to a close, the night began to heat up in Minnesota. Rioters began to push the 3rd precinct police department as officers were told to evacuate and stand down by the Minneapolis mayor. Around 10pm, equipment was stolen (with rumors of weapons being taken) and the station was lit on fire. By 10:53pm, most of the building was engulfed in flames. Gas lines were also cut, causing officials to warn of possible massive explosions.

A Walmart store and Target store were also set on fire in St. Paul & Minneapolis, respectively. BLM rioters also broke into a post office, but did not set it ablaze. Law enforcement also evacuated and retreated from the 5th precinct police building, allowing rioters to push inside.

Rioters blasted audio from The Purge over a loudspeaker, “Any and all crime, including murder, will be legal for 12 continuous hours.” Kidnappings were reportedly heard over the police scanner, during the riots, with “females being taken” reported.

The national guard was called in by the governor early in the afternoon, but not given directives to control the situation. As the night wore on, Humvees could be seen moving into position, but no recorded crackdown of riots happened.

President Trump tweeted about monitoring the situation and that he had been in contact with the governor. If things got out of further control, he said, the Federal government would step in.

When several rioters were interviewed on the street, they said “f*ck white people bro, they bad as f*ck bro, like bro.” Another rioter threatened to come to the suburbs. Yet another rioter yelled “One of ours, two of yours. We comin’ for ya’ll n*****! This is only the beginning mother f*****”