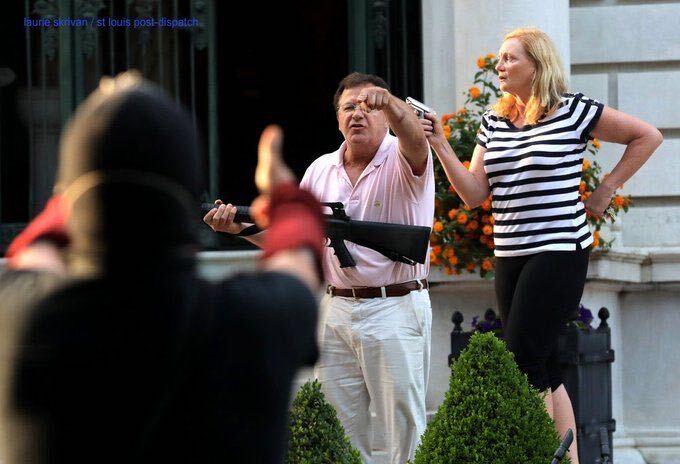 After every major downtown urban center in America has experienced riots, burning, looting, shooting and the defunding of police, demonstrators have moved into residential areas. Sunday night in St. Louis, Black Lives Matter (BLM) began moving into private neighborhoods and gated communities. One such incident was recorded, when a mob pushed through a private gate onto a residential walk. The march was met by a middle-age couple standing in front of their property, holding firearms at ready. The marchers moved quickly by the property, without incident, though the mob appeared angry the entire time.

Online, prominent left-wing activists were outraged a suburban couple would defend their home from a potentially volatile situation. Rachel Gonzalez (self proclaimed student activist with 30k followers on Twitter) and Stephanie Sidley doxxed the couple, releasing their names and form of employment on the site saying “Twitter, do your thing.” (in an attempt to hurt or possibly kill the couple). Kenidra Woods, a blue-checked verified user, also gave their place of employment calling them “cowards”.

Shifting from downtown to residential and suburban areas is a natural swing for a cultural revolution. The French Revolution has been praised and emulated by leftist activists online. A key tenant of the French Revolution was the Reign of Terror: public massacres and killings of aristocrats, the wealthy and leadership. This idolization has one demonstration in D.C. to install a guillotine in front of Jeff Bezos complex. The revolution will eventually become uninterested in urban centers and will focus their ire on the suburbs. Many of these suburbs are armed, however some are not. Watch for coming clashes in the weeks and months to come.

The cultural revolution has begun.