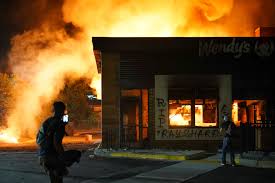 The Summer of Outrage

Atlanta police were involved in another officer-involved shooting over the weekend, where a black man was shot and killed. 27-year-old Rayshard Brooks was shot and killed after he fought with police, stealing a taser and turned it on the officers. Officers were initially responding to a complaint of a man asleep in a drive-thru lane. They issued a field sobriety test, which Brooks failed. After the officers attempted to peacefully take him into custody, Brooks fought back violently. Body camera footage is available for public viewing from the Atlanta Police Department. The officer has been fired from the department and the Chief of Police resigned.

In response to the officer-involved shooting of a black man, the protesters burned down the Wendy’s location where the shooting took place. Protesters have updated their signs to include Brooks’s name, and a “March for Justice” is scheduled to take place.

The summer of 2020 is becoming the summer of outrage. Every incident involving police and the black community will be amplified by the mainstream media.  Shootings, whether justified or not, will traumatize key audiences. Images are the most powerful tool of behavioral manipulation. Show a traumatic event on video (regardless of context) and run a desired parallel narrative. This is a tool to shift public opinion.

A key example of emotional manipulation was the lead up to the United States invasion of Kuwait in 1990. The key trigger for this decision was public testimony by a 15-year old girl named Nayirah. She gave testimony before Congress that Iraqi soldiers were going into hospitals, taking babies out of incubators and smashing them on the floor. This testimony was used in large part to justify the United States going into Kuwait by George H.W. Bush. Turns out the baby story was completely falsified. Nayirah was the daughter of one of the crown princes of Kuwait, and the story was COMPLETELY MADE UP by a PR firm, Hill and Knowlton, who spent millions to drive this narrative. Public sentiment was against the war . . . until this story was spread, and public opinion shifted in favor of the war. The narrative was a success.

When the public sees seemingly *countless* videos of police shootings of black men combined with a daily narrative of “racism” and “police brutality,” people start to believe this is true. It doesn’t take a conspiracy theorist to wonder why, suddenly, all these videos are out and going viral. Why all this chaos in an election year? Why a full-court press from every major American institution driving the EXACT same message? Because historical precedent suggests public opinion can be shifted dramatically with images, videos and story.